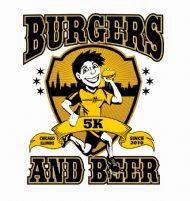 In 2012, Burgers & Beer went from a monthly fun run put on by Universal Sole to an official 5K with an inaugural run in Montrose Harbor. The first race was so popular that last year they moved it to The Park at Lakeshore East. And it looks like it's grown again because this year it's moved to Soldier Field.

Both the first and second year races were great (what's not to like about burgers AND beer?) so I think it's safe to assume that the third annual run on the evening of July 14th will be as well.

If you're interested in signing up,
the discount code bnb2014 is good for $5 off registration