My parents were in town this weekend from Texas. We rented an I-GO (actually, even better than that, I won the WEGO 10 monthly competition for 10 free hours with an I-GO, which was very sweet) and drove out to Channahon, Illinois for the Warrior Dash. This was my first "mud run" and I was pretty excited about it, because I've been creating an image of the mud run in my mind as a pseudo-hardcore fun run. I would say that I still feel that after running it, but I think now I see it as intentionally not hardcore. They're asking people to have fun, not to kill themselves.

Anyway, I ran with Brynn, and we made sure to take our requisite before and after photos. 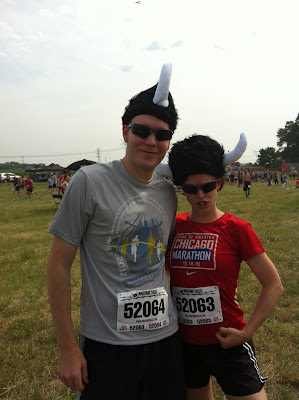 Filthy after photo (I think Brynn grew a goatee during the run): 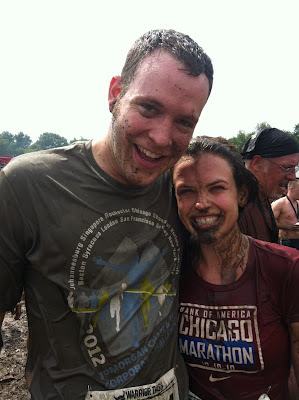 In the end, I was a little disappointed in the easiness of the course. I didn't expect it to be as tough as the commercials make it out to be, but I did expect more of a challenge (especially since, like a lot of runners, I have very little upper body strength). The obstacles were fun, but not really tough. Most were almost tough, and I think that's the point. I definitely had a great time, but I would tell people not to expect to be physically challenged - think more about having fun and goofing off. Think about the chip in your shoelaces as just a ticket for a free Miller Lite at the finish line rather than as a device tracking how quickly you can cover the course.

Brynn's running the Chicago Women's Half this weekend (I'm volunteering) and so she was doing the smart thing and watching out for potholes and other things that could injure her before the race. This also meant she was taking the run a lot easier than I wanted to. And I totally turned into one of those annoying running partners that keeps turning around and asking if you're okay and then running ahead of you for a little while and then slowing down again.

I really realized what I was doing at one point when we were next to this guy who kept turning around and yelling directions at his girlfriend (wife?) "KELLY! GRAB ONTO THE SIDE OF THE WALL AND WALK ALONG IT!" or "KELLY! COME DOWN THE CHUTE ON THE LEFT!" I started thinking how incredibly annoying that guy was and then realized I was probably just doing the passive-aggressive version of that. So then I started to lighten up and just enjoy the run. Luckily, Brynn put up with me (or at least didn't punch me in the stomach at any point).

Most importantly, I think I learned that a run like this is a lot more fun to do as a party run with a partner (or even better, a group) than on your own. If you try to do something like this competitively, you're just going to get mad at all the walkers and the lines that build up in front of the obstacles. So, it's better just to enjoy it for what it is and not try to turn it into a speed race.

At the end they had a huge pile of shoes that were donated, which was pretty cool. Though I heard a girl ask the volunteers where these shoes were being donated to and he said, "Oh, just to places." Awesome. So, in case you were wondering, "places" will be getting these shoes: 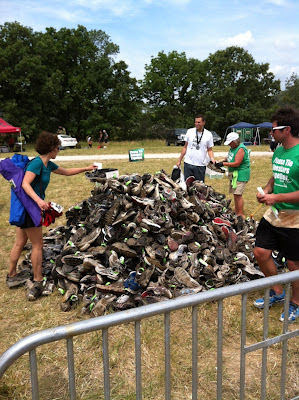 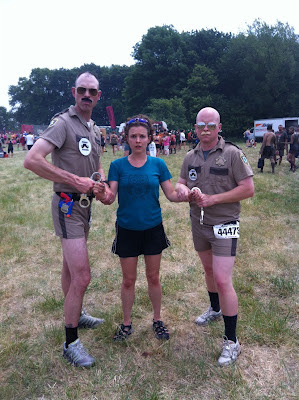